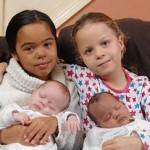 When twins Hayleigh and Lauren Durrant proudly got to hold their baby sisters, twins Miya and Leah, the chances were 2 in a million!

When the first set of twins arrived in 2001, the couple were astonished to see that Lauren took after her white mum, with blue eyes and red hair, while Hayleigh had black skin and hair like dad Dean.

Then this year Alison, 27, found she was expecting again — and lightning struck twice. She had twin girls again. And little Miya was born with dark skin like her dad and Leah is white like former recruitment consultant Alison.

Dean, 33, of Fleet, Hants, said: “The girls just love Miya and Leah to bits.  “We didn’t think it was even possible when we had Lauren and Hayleigh — and it didn’t cross our minds that it could happen again. But we are just delighted that it has.”

Alison said: “I was shocked when I first found out I was pregnant with twins again — but I never thought for one second they would turn out the same as last time.

“After the babies were born they weren’t breathing properly, so they were taken to a special care unit.  “It wasn’t until about five days after they were born that we saw them side by side for the first time.  “And when they were together it was clear that one was darker than the other. It was unbelievable.”

Staff at Frimley Park Hospital, in Surrey, decided to deliver the babies by Caesarean section after 37 weeks of pregnancy, when scans revealed both were breach.

Alison said: “Now the girls are back home with us and are very healthy. Lauren and Hayleigh think the new arrivals are fantastic.” Block paver Dean said: “It was a real shock to the system when I found out we were having twins again. I didn’t think the same thing would happen again. The odds must be millions to one against it.

“It was really stressful when they were first born, because they were being kept in different parts of the hospital, and the difference in shade wasn’t apparent.

“I was running around all over the place between Alison and the girls and when we finally got them all together it was the first time I noticed the difference.  “I could tell straight away that one was darker than the other. But it wasn’t as much of a shock as last time, as we had already been in this situation once.”

He went on: “Leah and Miya are so small they haven’t been out much yet — but some people have looked at us a little bit funny when we’re with Lauren and Hayleigh due to the colour difference.  “Looking so different has never caused them any problems and I’m sure it won’t for Leah or Miya either. When people see Alison and I they tend to realise why our children are different.

“The most important thing is THEY know who their parents are. It doesn’t matter what anyone else might think.” Alison agreed: “Everyone knows who their mum and dad is and it doesn’t cause any problems — why should it?  “We’ve had the odd comment from people about how different Lauren and Hayleigh look.

“Children at school used to say to them, ‘You can’t be twins because you’re different colours’.  “Some of the other mums didn’t believe they were twins either at first but then they see Dean and I together and realise.”  Dean added: “Having two sets of twins is absolutely hectic and we haven’t even had a chance to work out how much it will cost us.

“Thankfully we’ve had girls again, so we have some things put aside from when Lauren and Hayleigh were little. Friends and family are all offering help as well.”

Mixed twins are rare — but back in 2006 The Sun tracked down the parents of FOUR sets.

Terri and Malcolm Rayhaman, of Cricklewood, North London, were convinced there had been a mix-up in the IVF clinic when their tots were born.  Fair-skinned Luca was followed by his dark sister Marina. Terri said: “It was such a dramatic difference. But as soon as I held Marina I knew she was mine.” Malcolm, the darker of the two, has a Turkish mother.

A couple from Basingstoke, Hants, had twin boys Oliver, who was dark skinned and Boyd, who was white. Mum Claire is white and dad Spencer is of mixed race.

Kylie Hodgson, of Nottingham gave birth to blonde, fair-skinned Remee and twin sister Kian, who is black, in 2006. Both parents were of mixed race.

And Kerry Richardson, of Middlesbrough, Teesside, told of her two-tone twin boys.  Layton is like his dad who is white. Kaydon is more like his mum, who is of English-Nigerian heritage.  Kerry said: “Everywhere we go you can see people looking and you can tell they are dying to comment. I have to explain they really ARE twins.”