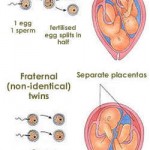 There are 3 main reference points which you may hear a lot of from now on in. They include the chorion (placenta), the amnion (the sac containing fluid in which the baby grows) and the zygosity (referring to the egg). These terms refer to whether the babies have their own amniotic sac, their own chorion (placenta) and whether they came from one egg or two.

A prefix of mono means one, so monochorionic means one placenta, diamniotic means 2 amniotic sacs and mono zygotic means from one egg.

What are Fraternal Twins ? Fraternal twins are the result of two separate eggs becoming fertilized, resulting in two completely distinct pregnancies in the womb at the same time.  They are known as dizygotic (see above). There is evidence to suggest that fraternal twinning can be passed on genetically on the maternal side.

What are Identical Twins ?

Identical, or monozygotic twins occur when a single conception splits into two around the time the fertilized egg is becoming implanted in the womb (usually between the fourth and twelfth day after conception). Medical opinion is that identical twinning is just a fluke, and is not a hereditary condition (see below).

The most common form of identical twins are mono-chorionic (one placenta), di-amniotic (two maniotic sacs). It is very rare to have mono-chorionic, mono-amniotic twins-these are then in the same sac, with no dividing membrane.

How do you know which you’re having ?

Most ultrasonographers are able to tell whether you are having id or non id multiples at around 12 weeks.

How do you tell the difference ?

Most non-identicals are quite dissimilar and can be told apart quite easily.  However a DNA test is required to determine for sure whether twins are identical or not.  Blood typing is a less certain approach that can also be used.  Medical opinion used to be that one placenta = identical twins, and 2 placentas = non-identicals, but this has been proved to be inaccurate as identical twins vary in the womb lining they share, and placentas can fuse together creating more confusion

What is the amnion ?

The amnion is the inner lining of the sac containing the foetus, also contains the amniotic fluid. A sample of amniotic fluid is taken during an amniocentesis – the fluid is tested for abnormalities which could indicate Downs or other disorders.  An amniotic fluid reduction is also performed in extreme cases of TTTS (see TTTS – Twin To Twin Transfusion Syndrome).

Twins are referred to as either monoamniotic – ie sharing the one inner sac, or diamniotic ie having developed in separate sacs .

Monoamniotic twins are always identical  (monozygitoc) but may be either monochorionic or dichorionic ie in the same or separate placenta’s.

Diamniotic twins can by either identical or fraternal, and either mono or di chorionic.

What is the chorion ?

The chorion is the outer lining of the sac containing the foetus, most commonly known as the placenta.

Twins can be either monochorionic (ie sharing a placenta) or dichorionic (in separate placentas).