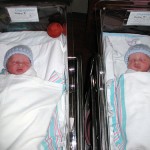 Amelia Hope Burden was born before the 24-week legal limit for abortion when her mother was just 23 weeks and two days pregnant.   She was born weighing only 1lb 2oz ten days before her brother Arthur arrived at 1lb 4oz.   He was born in July after Amanda Staplehurst had been pregnant for 24 weeks.

She went to hospital complaining of stomach cramps only to be told that she was in labour.  Amelia Hope showed little sign of life but doctors were able to revive her.  Under law they are not obliged to do so unless they feel it is in the child’s best interest.

Miss Staplehurst, 30, from Bournemouth, said “Doctors said she had just a 10 per cent of chance of survival and we never thought she’d pull through.  “Then having delivered Amelia Hope, it was totally bizarre that for ten days I remained pregnant with Arthur. The doctors have told us they’ve never come across a case like it.”

The babies are being kept in incubators but are putting on weight and said to be developing well.  The twins’ survival will give weight to the campaign to have the abortion limit lowered.  Some campaigners would like to see it reduced to 20 weeks.

seen in The Telegraph