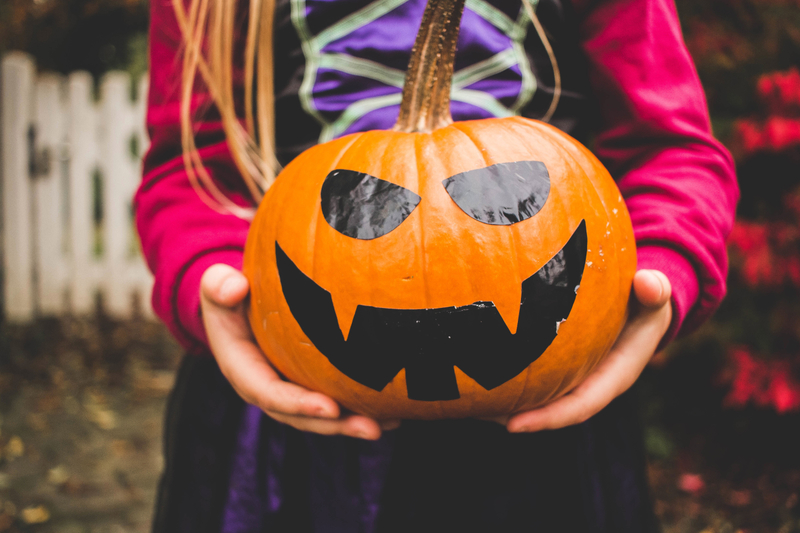 Halloween is an exciting time of the year for little ones; especially when it comes to trick-or-treating Many children, whether accompanied by an adult or with a group of friends, will be heading out dressed up in their spooky costumes to collect plenty of tasty Halloween themed treats.

However, while trick-or-treating is an exciting tradition, there are certain safety measures and ground rules that all children need to follow. And research has shown that only 35% of parents actually talk to their children about Halloween safety each year – a worrying thought.

With this in mind, here’s how you and the kids can have a “spooktacularly” fun, yet safe Halloween.

1. Decide Your Route in Advance

Trick-or-treating can sometimes take you far from your house; especially if not many on your street are participating. However, this means you need to be more selective about the route you take to keep yourself and your child safe.

Parents should lead by example and plan trick-or-treat routes in advance so children can learn where they are or aren’t allowed to go. This way, when they’re old enough to go out with their friends, your child should already know their boundaries.

If your child’s already old enough to go without you, agree a time for them to return home before they leave. They should also be instructed to only walk in well-lit, familiar areas avoiding dark alleyway shortcuts to avoid potentially dangerous areas.

2. Know Which Houses to Knock At

Being able to go door-to-door in your neighbourhood is certainly ideal, but this isn’t always a possibility, for not everyone welcomes trick-or-treaters. So, judging whether it’s appropriate to knock is essential.

The best practice is to only visit houses that have a pumpkin outside, as it’s highly likely they’re participating in Halloween themselves and expecting trick-or-treaters. If there isn’t a pumpkin or any trick-or-treat flyers, assume the resident(s) do not want to be disturbed and move on. Remember, this is not only for your child’s safety, but for potentially vulnerable people, such as the elderly, who might be frightened by groups of children knocking at their door in the dark.

If your child is old enough to trick-or-treat without an adult, you should explain to them that it’s important they respect the wishes and privacy of people who don’t want to participate; especially if they have signs saying “no trick-or-treaters”. And even if a house does have decorations up, children must be taught not to go inside anyone’s house under any circumstances. Preferably, they should only knock at houses where they know the occupants, rather than strangers.

Trick-or-treating can also be a frightening time for little ones that are too young to participate, so encourage older children to stay away from houses where smaller children could become unsettled. Parents can help to fix this through gradual exposure to Halloween. For example, Kiddi Caru nurseries help little ones who are scared of trick-or-treaters by discussing exactly what Halloween is all about and slowly introducing them to costumes.

In recent years, there has been a rise in cases where parents have reportedly found knives, razor blades, nails and even drugs hidden in their children’s sweets. These have frequently been debunked as urban legends, but you can never be too careful.

Check your children’s treats beforehand to prevent them from coming into contact with, or even worse consuming, any dangerous items or substances. Dispose of any sweets that look like they’ve already been opened, as they could pose a potential risk.

Wearing a spooky Halloween costume is one of the greatest tick-or-treat perks. But the practicality and safety of a costume should always come first; especially when your child’s going to be walking around for potentially long periods in the dark.

Take masks for example. Although they seem cool and can help your child have the scariest costume out of their friends, they can make it difficult for children to see or breathe, so proceed with caution. If your child really wants to wear a mask, make sure it’s big enough for their face so it’s both comfortable and safe.  Chemical-free face makeup or paint are great mask alternatives, but do check to see if it’s non-toxic before applying.

You should also pay special attention to the length of your child’s costume, as anything too long could be a trip hazard; especially at night. Hem anything that could result in tripping before your child wears their costume to ensure its risk free.

Try your best to avoid costumes that involve having weapons as accessories. However, if your child’s costume won’t be complete without a weapon, make sure it’s rubber or plastic to prevent any injuries occurring to your child or their friends.

And always be sure to check to ensure shop bought costumes are fire retardant, particularly at a time of the year that candles are prevalent on most door steps.

5. Be Wary of Food Allergies

It’s estimated 1 in 13 children have a food allergy. And with nuts, milk, eggs and soy commonly found in Halloween treats, it can be a very worrying time for parents whose children suffer from allergies. Usually, confectionary only labels allergens on the outside wrapper and not each individual treat. And there’s no guarantee every house you visit will take such risks into account.

Be sure to check all sweets your child is given beforehand to identify anything that could be a potential risk. If your child’s going out with their friends, explain to them they need to wait until they’re home before consuming any sweets they’re unsure of. Make sure they have an EpiPen and a fully charged mobile phone in case an allergic reaction is triggered. 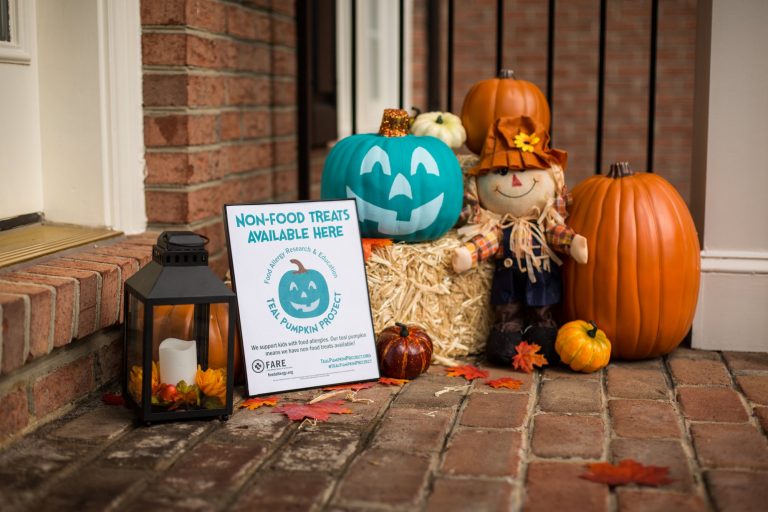 For many, a popular alternative to giving out risky confectionary is the Teal Pumpkin Project, which aims to raise awareness and make Halloween safer for children with food allergens. If you have a child who suffers from food allergies, be on the lookout for teal coloured pumpkins on your trick-or-treat route, as this house will be providing non-food treats.

Or, if you plan on giving out non-sweet treats, you can get involved in the project by painting a pumpkin teal and placing it outside your house. The treats you offer could include:

Of course, there are still some considerations to make when handing out non-food items. For example, mouldable clay can contain wheat, while balloons can contain latex. You can download some Teal Pumpkin Project flyers and signs to put up outside your house here.

6. Go Before it gets too Dark

Although the evenings start to get dark quicker in October, there is plenty of time to go trick-or-treating in the early evening before the sun goes down. As we all know, walking around on dark nights can be scary for younger children, and statistically, it is also more dangerous. So be sure to take young children out before it gets too dark and take torches with you to light the way to make the evening seem less frightening.

If you want the fun to last a bit longer, you could always throw a Halloween gathering at home for your child’s friends and their parents. After all, Halloween is only celebrated one night a year, so a party is the perfect way to end it on a fun, yet safe note. This year, plenty of shops such as budget a multitude of high street stores sell a variety of Halloween themed decorations and party essentials, so your little one and their friends can have an exciting Halloween without breaking your budget.

Worryingly, children are over 10 times likelier to be involved in a fatal pedestrian accident on Halloween than any other night of the year. But thankfully, these unnecessarily tragedies can easily be avoided by following basic road safety guidelines.

As an adult, it’s your responsibility to make sure you’ve double checked every road direction before crossing. If you’re in charge of a large group of children, be sure that nobody crosses the road without your say so. Children must be reminded of the Green Cross Code, which states the following:

Although you’re likely to see many families walking through the streets on Halloween night, this doesn’t mean the roads have become safer. Stick to the pavement at all times and try to avoid areas that involve crossing roads on dangerous corners where visibility is limited. You don’t want to risk being overlooked by a driver. For extra precaution, you could add reflective tape to your child’s costume or a rucksack to increase their visibility for drivers.

Trick-or-treating is one of the best parts about Halloween for children, but this doesn’t mean safety should be forgotten. By following these tips, parents and children can both enjoy a risk-free Halloween.