Stand-up comedian Sam Avery (aka, the Learner Parent) started his award-winning blog when his twin boys were born. A million nappies, Peppa Pig episodes and a lot less sleep later, he shares all the lows, highs and hilarious in-betweens of his experiences of first-time parenthood in this, his highly anticipated debut book.

Sam’s honest, messy and laugh-out-loud account of trying for a baby (which transpired to be babies) and figuring out what to do with them once they arrived, right up to the toddler years of talking, walking and tantrum-ing, will have you crying with laughter between your own nappy changes and nursery runs.

SAM AVERY – ‘In my wildest dreams I never thought that what started off as a simple way of remembering key moments with my kids would evolve into an actual book. When my wife was pregnant I swore I’d never be one of those parents who over shared stuff about their kids on social media but look at me now! It’s clear that when my kids were born I didn’t just become a parent, I also became a hypocrite.’ 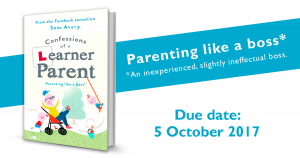 Sam Avery, a quasi rock star in his ‘youth’ and a stand-up comedian ever since, started a blog when his twin boys were born to share his parenting jubilations – and tribulations. Within months he had won Best New Blog at the MAD awards and saw the devoted following to his Facebook page, which he updates regularly, sky rocket (currently 100k followers). He has been featured in the Mail online, the Lad Bible, Netmums and the Liverpool Echo and makes regular appearances on 5 Live and BBC 6 Music.