Written with humor and honesty,  ‘Parent like a Triplet’ by Norwegian identical triplet Kari Ertresvåg is out on Amazon on 20th Feb 2020. The book is a rare first person glimpse into what it’s like to grow up a multiple and an A-to-Z on parenting twins and triplets. Parents who have already read it say it is “a bible for parents of multiples”, “funny, honest and heartfelt” and “like having a conversation with an old friend”.  Psychologist and twin expert Joan A. Friedman, who’s written the book’s foreword, even says it “might be the most extraordinary book out this year”. 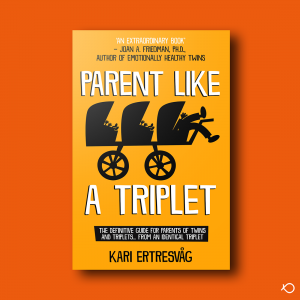 Both paper back and Kindle edition are available on Amazon
If on Facebook, you can visit their page at  https://www.facebook.com/ParentLikeATriplet
It is aimed at making readers feel what it might be like to be a twin or a triplet, Kari shares real-life examples from the weird and wacky world of growing up as an identical triplet. She weaves in practical and tried-and-tested tips, tricks and advice based on psychologist insights and research so that parents can learn how to raise happy, emotionally-confident multiples with strong sibling bonds. 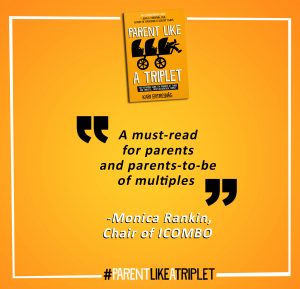 We were pleased to be sent a pre-release copy to review and had an enjoyable read and can’t recommend enough.

I wondered if this would be a normal parenting book telling you ways to bring up your twins or triplets, giving all the normal tips that you get. That was not quite what it is. Nicely, it is instead a series of topics and stories from birth to adulthood about being an identical triplet and what that means in what are sometimes everyday events. Some really interesting and personal expression of feeling by not only Kari, but her sisters and her non triplet brothers – also from her father. The choices over time that were made, how they turned out and what it meant to the family.

Thought provoking stories and thoughts about multiples, from a multiple, written in a light and but interesting story telling way. It made me think, some of the bits about friendship and ongoing life, the idea of when you get to find a relationship, get married – for a singleton you might have a close brother or sister, but do you have one as close as an identical triplet? Who do you talk to first, your triplet sister or your husband, and how does that make everyone feel?

How do your non-triplet siblings feel, how do your parents feel. Importantly, how does everyone treat you and deal with the idea that you are an identical triplet and yet you are an individual too. The stories of birthday parties and presents, being treated as one unit when in fact you are three different people. Your friend “wanting a triplet to come over and play” but not really caring which one…

The book takes you through the story from birth to right up to getting married and on to old age. It gives tips but I feel the a big purpose is to share the story. It made me want to keep reading as I wanted to know about the next part, reading about how you feel knowing that in different countries there are “identical beings”, somehow finding your way back to your identical siblings over the years, at the same time not being the classic story book twin/triplet that you see in Enid Blyton books or Harry Potter (but maybe relating to the Weasley twins in places).

The book is well referenced throughout with a lot of further reading should you choose to do so, meaning it’s stories on real life at the same time as drilling into some of those “moments” backed up by people’s thoughts and research.

As a parent of grown up identical twins, I could relate to bits as a parent, Kari has been able to further explain how my own children may have had and still are handling being identical.

(we received an advance reading copy of this book for free from the author for review, with no monetary gain)