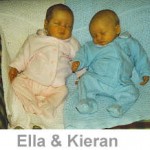 I went for my 32 week scan and was told that twin 1 had stopped growing and they wanted to keep me in. I didn’t want to stay in because it was my son’s birthday the next day and we had a BBQ planned for him, invites had gone out to all his friends and he was looking forward to it.

So they said I had to have a doppler scan and if it was ok I could go home for a few days. I went for the doppler scan and it showed that twin 1 wasn’t getting much blood suply so they wanted to deliver the twins by c-section the next day (son’s birthday), so I didn’t get to go home. I live about 50 miles from the hospital and was using public transport as we didn’t have a car at that time. I was given a bed and DH got the bus home to get my hospital bag, his brother gave him a lift in the evening. The next day I called my son to wish him a happy birthday, he went to school and told his friends the BBQ was cancelled but he was quite excited that the twins were going to be born on his birthday. DH got a lift in to the hospital with a friend and then we were just waiting all day for the c-section, I was quite nervous! Finally they got me ready for the c-section, it all went well and Kayleigh was born at 4.26pm weighing 3lb 6oz and Cassandra was born at 4.27pm weighing 2lb 11oz. I got to have a quick look at them, DH got to have a cuddle with Cassandra and then they took them off to ICU. I was taken back to the ward.

I hated not being able to see them, DH went to see them and they took pics for me but it wasn’t the same. DH went home to spend a bit of time with Daniel on his birthday. I was taken to see the girls in my bed at about midnight, they were so tiny and had tubes and wires everywhere. I went home after 4-5 days, I was torn between staying with the girls and going home to be with the boys. I came to see them 3 times a week, which doesn’t sound like much but I had to get the bus in and find someone to watch the boys. I went in on a Monday and Thursday by myself as DH had to work. On a Saturday we all went in. I was breast feeding too which meant expressing and freezing the milk and getting it to the hospital frozen and the bus took nearly 2 hours. The girls were moved from ICU to SCBU after a couple of weeks and they gradualy got stronger, then Kayleigh cought MRSA so they were put in a room by themselves. It was an emotional rollercoaster seeing them gradualy gain weight and get strong enough to come home, but the day did finally come.

I wouldn’t be without them for the world and now they are 2 1/2, I have the perfect family! Karen ( Crispycake )

You would never know to look at my girls that they were 8 weeks prem! They are now 5 1/2 and started school in August 08, they are the smallest in their class but not by much. They are very advanced with their reading and get on great at school academically. They are also very mischievous, they like to pretend to be each other and confuse people, however those who know them well are not fooled.

They are great friends and look after each other (they also argue but no more than any siblings do) they are worth every bit of worry, stress and tiredness that we went through at the beginning, having twins is special and very rewarding!

Looking back now I wouldn’t change anything, everything worked out perfect, I couldn’t be happier!