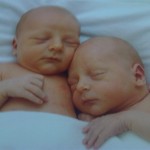 I am blessed to have two gorgeous daughters Bethany 11 & Isabella 5, I said to my husband I’d like one more before I’m 30! Anyway fell pregnant pretty quick, I felt like something wasn’t right the sickness was terrible. Had my 1st scan on the 24th February 2010, I remember feeling sick on the morning something wasn’t right, I sat in the chair while the lady put the gel on my stomach and started the scan, she gave me & my husband a strange look and that was when she told me your having TWINS- oh my god, oh my god, oh my god thats all I kept saying, that was the last thing I thought she was going to tell me.

I couldn’t believe it, what was I going to do, how would I cope, how would I manage OH MY GOD! what I really should have been thinking was how blessed & lucky am I! I carried on going for scans every few weeks, everything seemed to be going fine, I think it was around 20 weeks when I found out I was having two boys, I couldn’t believe that either I would have put money on me having two more girls.

Twin 1 was head down from quite early on, they were worried I was going to have them early so I had to have the steroid injections around 24 weeks. I carried on with my regular scan and appointments and everything seemed to be going well.

I got to about 30 weeks and my legs and feet started swelling they were worried I had blood clots so I had various test done, but luckily it was nothing as serious as that – probably just the pressure of having two babies in side me. When it was near the end of the pregnancy I was huge I put on 3 stone which doesn’t sound bad but I’m only 5″3 & 8 stone.

I was told I would only go up to 38 weeks, I was lucky enough to go to 36 weeks, it was 11pm & I was laid in bed thinking oh my god the pressure down below is terrible I had never felt anything like it, the next thing I jumped up and ran to the bathroom that was it my waters had gone, I had never experienced that with my daughters.

I phoned the hospital and they wanted me straight in I got checked over and was put in a room , I think it was probably the hardest labour I had been through by 7.30am the next morning I was still in the same position.

The doctors decided it would be best for me to go to theater to get help with my labour & just in case they needed to do an emergency cesarean to get twin 2 out. Anyway after a lot of pushing and forseps they managed to get twin 1 out at 8.32am, he came out screaming, they tried turning twin 2 as he was breech, this was an experience, he wouldn’t turn so the second little man came about breech.

He didn’t cry straight away I think was too out of it to realise though. we named twin 1 Jake and he weighed 6lb 10 & twin 2 we named Lucas and he weighed 6lb. Both were healthy little boys and we were lucky enough to take them home after 2 days in hospital. After getting over the shock of having twins I think I am the luckiest woman a live. Having twins is an amazing experience and brings you so much joy, you could never imagine.