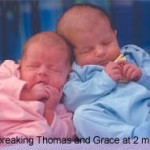 Prior to Beth Ryder, giving birth to the heaviest set of mixed sex twins in 2007, the title was held by proud Twinsclubbers Sue Hughes and partner  Steve Houghton-Burnett.

On Sunday 3rd November 2002, Sue and Steve had become parents of the UK’s heaviest set of newborn twins since records began.

Sue, 37,  a qualified Midwife for 12 years, said her training didn’t help to allay her fears, in fact she believed that she knew too much and it worried her more! Although there were twins in her family, Sue never thought that she would have twins herself.

Thomas and Grace featured in the 2008 Twins & Triplets calendar produced by Twinsclub, but are happy to have given up their time in the spotlight.

This is their story taken from the calendar :

” Although I already had a son Jack from my first marriage, and my partner Steve had 3 children from his, we were still thrilled to discover we were expecting a baby together.  My first scan left us speechless to discover twins (you’d think with 3 sets in my family and me being a midwife I would have expected it!)

Then came non-stop morning sickness and fatigue like I had never known. It wasn’t long before my bump began to grow… and grow… and GROW! I was so huge that people were stopping me in the street to ask how many babies I was carrying! Luckily, I had an uneventful pregnancy and was induced at 39 weeks after a 13 hour labour.

Thomas was born first followed by Grace exactly an hour later (which I think was the longest hour of my life!). After the relief of giving birth, we were amazed to discover that Thomas weighed a whopping 10lbs 1oz and Grace was 8lbs 2oz. No wonder my knees were buckling towards the end.

People were making such a fuss at our huge babies, we even appeared on GMTV and in the national newspapers. We were so proud to discover that they were officially the heaviest mixed-sext twins in teh UK and the heaviest born naturally. Since then, our lives have been very busy indeed, especially following the arrival of our little surprise, Lydia, who was born when the twins were 25 months old. It just seemed to be endless nappy changing in the early weeks.

Some days can be stressful, especially when they fight over things, but it’s wonderful to watch their very unique relationship develop. We only have to catch a glimpse of their closeness and hear them giggling and playing together and it reminds us how blessed we are to be able to share our children’s magical journey witih them.

The heaviest birth weight for surviving twins on record goes to Mrs. J.P. Haskin of Arkansas, on February 20 1924, whose twins weighed in at an eye-watering 14lbs & 13lbs 12oz, totalling 27lb 12oz.

The Uk’s heaviest set appear to have been the Warren’s born on December 6th 1884 totalling 25lbs 8ozs.

Other Twinsclubbers with big babies :

Lindsay Ainley in Wakefield had twin girls Amelia and Georgia who weighed in at a total 17lb 3 1/4 oz..

Sarah McFarlane from Surrey emailed us to say: “I was very interested to read about Thomas and Grace, and can (almost!) empathise with Sue Hughes.

I gave birth to Jasmine and Isobel in April 2003, who were 7 lb 1 oz and 7lb 11 oz respectively and ever since have been on the hunt for someone who can beat me! I’m sure people think I’m a bit strange as the first question I usually ask a newly-met twins mum is how heavy the babies were.

I had to be induced at 40 weeks as they showed no sign of wanting to come out and would have happily continued growing I’m sure! Also, being so large (my waist grew to over 50 inches) I suffered from a severe and disabling abdominal diastasis after the birth (since corrected with lots of physio exercises), which I was amazed that most midwives I saw, included one who’d had twins herself had either never heard of or knew very little about.

Also, doctors were a bit lacking on the information front too on this condition, and there was not much on the net either. I know all about the attractions of ‘twin skin’ too!  Sarah Macfarlane, Surrey, total baby weight 14lb 12oz.

Keren wrote to say “I was induced at 39 weeks because of my large size due to Noah being 7lb 15oz and Isaac 7lb 9oz, being non-identical had 2 placentas and lots of water!! ” Keren. Total baby weight, 15lbs 8oz

From Lesley “I thought my two were big – Jack 7lb 8oz and Holly 7lb 5oz. I was dreading the birth as I was going to be induced on Christmas eve at 7am but made it to the hospital at 3am and had them both by 9.30am”. Lesley mum to Jack and Holly 24/12/01 Total baby weight 15lbs 1oz

We think the heaviest triplets on record in the UK were born in 1914 to the McDermott family – the combined weight of the three babies was 24lb – each baby averaging 8lbs.

Do you know more ? Did you have heavy twins or triplets ? Write and tell us now!