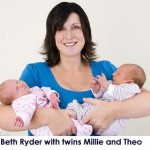 Britain’s heaviest mixed-sex twins have weighed in at a combined 18lb 12oz. They were born last Thursday at Burnley General Hospital and beat the previous record held by Thomas and Grace Houghton-Burnett, who weighed 10lb 1oz and 8lb 2oz when they arrived in 2002.

Theo and Millie missed out on being Britain’s heaviest twins by just 6oz.

Mrs Ryder and her husband Steve, 32, suspected the twins might be big – they have four other children who all weighed more than 9lb 9oz. Mrs Ryder herself weighed 11lb 13oz and her sister Claire was 12lb 2oz.

The student nurse told the Rossendale Free Press: “The doctors and nurses said they were going to be big, but not this big. I was shocked when I saw them both.  “There is no secret to it, I think it’s just all genetic. Before giving birth I was massive.  “I couldn’t even sleep and it was very uncomfortable. It is a big relief now.”

A spokeswoman for Burnley General Hospital said Theo and Millie were the heaviest twins they had ever delivered.  Twins usually struggle to meet the average newborn weight of 7lb.