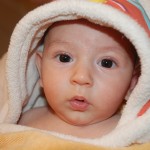 You’ve sent us in some fabulous tales over the years – here are some of our favourites.

Wind Beneath My Wings!

My two yr old boys are obsessed with sanitary towels & tampons. No matter where I hide them, they find them!! They love unwrapping the towels & sticking them just about anywhere- they think tampons are large party poppers!! I can just about live with all the mess they create but recently I was waiting for a TV engineer to call.

I’d waited in all day, the boys were restless & had unwrapped just about every towel & tampon in sight for amusement. I’d cleared up after them just in case the doorbell rang. It finally did ring- the engineer came in & just as I followed him into the lounge I saw a towel, complete with wings, stuck to the wall above the sofa!! How this guy didn’t see it was beyond me, but I’ve never moved so fast & have never felt so embarrassed.

I can laugh now but at the time I was mortified. I’m sure he never saw it because he did not flinch or look or act awkwardly & surely seeing a winged towel on display in someones lounge like a treasured photo is not an everyday occurrence!

I had the worst day on record the other day, I truly thought that someone had swapped my kids in the night for these little monsters that appeared in the morning. It all started when my three year old little darlings covered each other’s hair in green hair gel – a whole pot. Then after I washed it out they decided to trim my daughters hair with nail scissors they had nicked out the bath room, after putting a whole tube of toothpaste in the bath and cleaning the floor with moisturiser.

This was in a space of three hours, what was I doing I hear you cry well believe it or not I was watching them, just not when the phone rang or the next-door neighbour popped in for milk etc etc.

The last incident of the day was the nappy cream which was painted all over the hall walls. It was entirely my fault of course, I had told them they could not paint today but told them to pretend to do so instead. So they did,  with the nappy rash cream.

Each new day brings a new challenge and a new type of headache !

“Things I have learnt from my children (no kidding!)

Sent in by Sharon, mum to Aaron and Kaleb

If you spray hair spray on a nylon duster and then run over it with roller skates/blades, they can ignite.

A 3-year olds voice is louder than 200 adults in a crowded restaurant.

If you hook a dog leash over a ceiling fan, the motor is not strong enough to rotate a 42-pound boy wearing Batman underwear and Superman cape. It is strong enough, however, if tied to a paint can, to spread paint on all four walls of a large room.

A ceiling fan can then hit a ball a long way.

The glass in windows (even double-pane) doesn’t stop a ball hit by a ceiling fan.

When you hear the toilet flush and the words “uh oh”, it’s already too late.

Brake fluid mixed with bleach makes smoke, and lots of it.

A six-year old can start a fire with a flint rock even though a 36-year old man says they can only do it in the movies.

Certain bits of Lego will pass through the digestive tract of a 4-year old.

Play dough and microwave should not be used in the same sentence.

No matter how much jelly you put in a swimming pool you still can’t walk on water.

VCR’s do not eject toasted sandwiches even though TV commercials show they do.

Marbles in petrol tanks make lots of noise when driving and are very expensive to remove.

You probably do not want to know what that smell really is.

Always look in the oven before you turn it on. Plastic toys do not like ovens.

The average response time for the fire brigade is about 20 minutes.

The spin cycle on the washing machine does not make earthworms dizzy.

It will, however, make cats dizzy.

Cats throw up twice their body weight when dizzy.