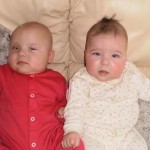 Gosh my birth story where do I start?  It was back in march 2008 when I said to my husband I wanted one more child and thats it I would be done. He wasn’t too happy and he refused and said two was enough as we already had a boy and a girl.  But I nagged and nagged and finally got what I wanted. So I comes off the pill and starts trying, each month kept being disappointed, then at the end of May I do a pregnancy test as I’ve missed my period by one day. I know one day isn’t a lot but I knew I was pregnant.

The test says negative, I was gutted.  I wait another three days and still no period and do another test and it’s still negative. My friend says ‘well you defo can’t be pregnant’, I said but i know i am.  A week passes and I do another test and I see a faint pink line, I started shaking just staring at the test. When hubby comes back in from picking the kids up from school I hands him the test, he said what’s that? I said’ oh its a toothbrush what do you think it is’. He said oh well then here we go again. I was so excited but things were about to come crashing down.

Six weeks after I found out I was pregnant I get a phone call saying my brother had gone swimming and he had dissapeared and no one can find him, omg my heart sank, I knew straight away he was dead. I phoned the coastguards just to check it weren’t all a horrible joke but no it wasnt, they had been searching for over an hour for my brother. I just crumbled, but all we could do was wait, and waiting is what we did, after a week we still hadn’t heard anything, there was no signs of my brothers body anywhere.

Then I had my 12 week scan, which I was dreading, because of the stress, I wasnt eating, sleeping, I thought the baby was dead.  The sonographer took ages, it must have been a good 15 mins before she said anything, I thought that’s it, I’ve killed the baby. Then she said is there twins in the family? I stuck my hands over my mouth and said yes why? She said because I’m defo seeing two babies here. I burst into tears and had my hands over my eyes going oh my god oh my god oh my god, I must have said it loads because my husband had to tell me to shut up. She then said to me, I can see a 3rd sac but cant quite see so we will make another appointment for you within the next week or so for you to have a detailed scan, I thought god no please dont do this to me.   First thing I done was phone my mum, she needed a bit of good news and she was thrilled but also sad at the same time. Everyone else just laughed.

A few days past and my mum comes through my door and I could tell by her face that my brothers body had been washed up, things were tough for the next few days but something just clicked in me and thought you can’t let yourself go down, you can do this. So I started to pick myself up, the following week I had that dreaded detailed scan and thankfully there wasnt a 3rd baby, phewwwwwwwwww.

The rest of my pregnancy seemed to go pretty smoothly, I was tired and had a few aches and pains but nothing I couldn’t deal with. Then I hit 30 weeks and omg I suffered with horendous rib pain, I would cry every morning because I didn’t want to face the day because I didn;t feel it when I was sleeping and it just made me depressed again.  I started to blame myself for my brothers death, maybe if I hadn’t have gotton pregnant he wouldn’t have died, was I too greedy? People said I was stupid but you cant help thinking things.

Think I was 34 weeks when I started bleeding, off I goes to the hossy and they said I’ve had a show, so I gets strapped up and babies get monitored, but they are fine and my uterus isn’t contracting so off I goes back home.  37 week mark comes and omg I’m so pleased as Its C-Section day, I thought no more rib pain. 23rd jan 2009 I’m at hossy at 8 in the morning, lady comes in gets me to put my gown on, and the consultant comes in to scan me one more time to check the positions of the baby. By 8.45 I was in the theatre I was absolutly petrified, I was convinced I was going to die or one of the babies was going to die, I kept on scanning the room looking for my brother because i knew if I seen him then someone was going to die.

They start cutting, one baby gets pulled out and i’ts Chloe, then Ethan comes out a minute later. The babies were absolutley fine. I still had a while to go because I was being sterilised, so I’m lying there and I feel burning and the scissors being clamped on my belly, my face went white, I gripped my husbands hand and the doc asked me if I was ok, I said no i can feel it.   They gave me gas and air but it didnt work I could still feel it, I was crying because it was so painful. They then rushed a steroid drip through me but by the time that had gotton to work the surgeon had finished. I let out a big sigh of relief, I felt like a load of stress had been lifted off me, I was alive and the babies were alive.   I looked down at my chest at these two babies and was just in amazement, I don’t think I ever actually believed I was pregnant with twins but seeing them in the flesh I just thought wow.   It is a truly wonderful, exhausting experience and I wouldn’t change it for the world, my only regret is my brother never knew it was twins but I’m sure he’s looked down on me laughing just as everyone else did.