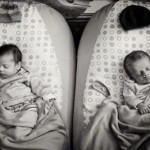 Well my twins story is both very sad and very happy.

My husband and I already had a little boy who was born in August 2005 and so in April 2008 we decided to try for another baby. At the 12 week scan we were very surprised to find out that we were having twins (naturally conceived) – so excited….at the 20 week scan we found out that it was a boy and a girl, even better! Then at just over 24 weeks I had a ‘show’, I rang the hospital and they said I’d be fine as I was in no pain. The day after I went for a growth scan and told the sonographer about what had happened the previous night and she said both babies were fine so don’t worry. However….about 3 hours later, when walking home from work, the pain started and came on so quickly. After getting home I rang the hospital and an ambulance was called and I was taken to the hospital – I was told I was already fully dilated and there was nothing they could do, so about 10 hours later I gave birth to Elsie-May who was stillborn and Sam who was born alive but unfortunately he passed away 30 hours later after being transferred to an intensive care neonatal unit. They were born at 24 weeks and 5 days. It was so very hard to get over our loss – I just wanted to crawl into a hole and stay there. I just couldn’t understand what I had done wrong (although everyone around me was trying to explain that I had nothing to with it but of course I was going to blame myself). We went to see the Consultant to see if she could try and explain why it had happened – we were told that it was just one of those things that can happen with twins and I should be fine if and when we wanted to try again for another baby.

6 months after the loss of Elsie-May and Sam we did decide to try again and we caught almost straight away. At about 6 weeks into the pregnancy I started to have a little bleeding so after what had happened to us last time I went straight to the hospital. During the scan I was shocked to hear that there were two babies – again, but at the time no heartbeats could be seen – they explained that it could just be too early and I was asked to go home and return for another scan in 10 days time. 10 long days later there they were, two heartbeats, we were so excited but so scared at the same time. But the pregnancy wasn’t to go smoothly – I had bleeding on and off up to about 14 weeks which couldn’t be explained. At the 12 week scan they said one of the babies had an increased nuchal translucency measurement so I had to be referred to a specialist hospital for further tests. After being told that one of the babies had a very high risk of a chromosomal disorder (purely based on this measurement) we decided to opt for an amnio. At 16 weeks I had the test on both babies and after waiting for what seemed an age, the results came back and both babies were fine – thank goodness. However, I was then told that one of the babies had a hole in their heart. It was at this stage that we decided to find out the sexes of the babies and again it was a boy and girl and it was the little girl that apparently had a problem with her heart. The specialists said it was highly likely that she would require surgery to rectify the hole shortly after birth.

Following my previous premature labour the Consultant decided to try and lengthen this pregnancy by putting in a cervical stitch which was done at 18 weeks. At my next midwife appointment at 20 weeks she checked the heartbeats as they do after I had told her about the little girl having a hole in hers. The midwife said that both heartbeats sounded perfectly normal to her but it was best to listen to what the specialists have said.

At the follow-up scan at 22 weeks I had a detailed growth and cardiac scan and I was then told that the apparently ‘large’ hole had actually resolved itself and both babies were perfectly normal. So after all that everything was fine but now the real panic started – could I keep the babies in long enough so that they would be OK? ….we counted every day and every week that went by. I finished work at 23 weeks into my pregnancy and I basically put myself on ‘sofa’ rest. I got to 25 weeks, 27 weeks, 30 weeks then I started to relax a little. Further growth scans saw the babies putting on weight, getting bigger at each scan and then I got to 33 weeks and 3 days – Christmas Eve 2009. I started having back ache and all the signs of going into labour. I called my mum and dad to look after our son and then my husband and I went to the hospital. Sure enough I was in labour – the stitch had still allowed me to dilate to 3cm but now it needed to be removed so that I could progress. Only 4 hours later I gave birth naturally to Noah who weighed 4lb 7oz and 30 minutes later Lily, who weighed 4lb 4oz, popped out. Both were fine for being born a little early. We spent Christmas in SCBU as the hospital wanted to ensure they were putting on weight, feeding well and maintaining their body temperature. 14 days later we were all home – happy days….