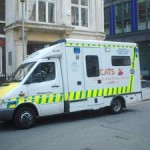 For the first time, a television series follows the remarkable work of the mobile intensive care teams dedicated to taking critically ill children to the UK’s specialist hospitals.  Every year thousands of children fall seriously ill.  But there is only a limited number of hospitals with paediatric intensive care units across the UK.

A new BBC One series, Children’s Emergancy takes the view on an exceptional journey with CATS (Children’s Acute Transport Service), a unique service designed to take the skills and high-tech equipment of a paediatric inensive care unit ‘on the road’.  This highly specialised team operates around the clock to make sure that the sickets children in Britain get the life-saving treatment they need, wherever they are.

The series follows CATS as they travel by road, plane or helicopter (the only service outside  the US and Canada accredited for all three modalities of fixed wings, helicopter and ground transport) to stabilise and safely transfer young patients to specialist hospitals including Great Ormond Street Hospital for Sick Children, St Mary’s Hospital and Royal Brompton Hospital in London.

With a close focus on the key characters from the retrieval team we witness each story from their perspective.  These are the country’s top paediatric consultants and nurses and full-time CATS consultants, including two of the most highly nurses authorised to take lead on retrieval missions, a rare qualification held by less than 10 nurses in Europe.  It follows the emergency calls to CATS HQ in London, the retrieval missions against the clock, the critical issues faced by the medical staff, the attention at the specialist hospital, to the rehabilitation and finally the resolution of the story as the family return home.

Each episode intercuts several poignant cases with key elements common to all: the outstanding skills and care of the CATS teamsl the often astonishing bravery of the children, and the families’ reaction to the unfolding events.  Children’s Emergency is a tribute to a very special team of men and women the public knows little about but who make a cricial difference in the lives of many families every day in the UK.

Twinsclub were glad to help when September Films, the producation company behind Children’s Emergency contacted us to help spread the word of this new series.   From what first sounded like “yet another hospital fly-on-the-wall”, it was clear to see from the pre-production showing that it was different to the norm – as even the later (possibly more serious) time slot that BBC decided on demonstrated too.

Parents of twins and multiples are quite likely to see the inside of a Special Care Baby Unit (SCBU) for maybe a brief visit or sometimes for months of life changing days.  This is what makes this series even more closer to home for some of us as watching this takes you back and reminds you the professionalism involved in such delicate everyday life.  The norm maybe for the professionals but totally unthinkable events for the parents.   Transport from a normal  hospital to a specialist hospital, even  just short miles across town, turns into a what seems an impossible task to recreate not only an intensive care ward in an ambulance, but one for a child.    It does make you stop and wonder when you are in the car and just stopped to let an ambulance through the traffic, who and what is going on in that ambulance, inside may be an intensive care environment of such degree that it is a world within a world being supported.

The scenes from the first episode demonstrate the skills and people involved, plus the angencies of the RAF and St John Ambulance.  Between 2008 and 2009 CATS handled 2078 calls and 1103 critical care retrievals.  The programme shows, during life saving heart surgery for a baby who had just been transported by CATS in a critical condition, her heart stopped.  The doctor in charge calmly asked the team if they could wait a bit while she restarted the heart.  She did, the operation carried on.   Emotion, panic, sensationalism…. is not part of all this and what they do, nor is it part of this TV series.