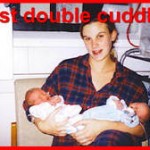 On 27th November 2000 I was 35 weeks pregnant. I had been for a scan and blood tests in the morning (had been going twice weekly), as I had obstetric cholestasis which is a liver disorder in pregnancy. I had had this for about 3 weeks prior to having the twins. It is a fairly uncommon complaint in pregnancy but is more common in multiple pregnancies. The signs are severe itching particularly to the hands and feet at night. If left untreated can cause still birth or birth defects. I had been given another 2 dates for scans the following week, so was feeling very down. I just wanted to have my twins here and well, as the OC showed no signs of stopping.

It was 6 o’clock that night and I had just finished watching neighbours, when twin 1 gave what felt like the biggest jump/kick ever, this made me move from the chair, and start to rush to the toilet. But when I got up there was a puddle on the floor, so I am now thinking is this my waters or have I wet myself! I was half way to the phone, but I froze, as I knew my husband would be home within the next minute so no point ringing him. The puddle on the floor was really big, I don’t think I was expecting so much fluid. By this time I was in tears and at the same time trying to keep the cat away from licking what I now know were my waters.

Just then the door opened and my husband came in, all I can remember saying was I think I’ve wet myself, he told me not to be so silly and rushed to ring my Mum. Then he rang the hospital. Mum and Dad came round and we rushed to the hospital, well not all of us we left poor old Dad to clean up the mess (good old Dad). At the hospital was put into the antenatal room where all the curtains bar one was drawn, and hooked up to the monitor. Could trace the heart beats, but could also see the placenta monitor was working every 6/7 mins but I couldn’t feel any contractions – all I felt was myself getting stroppy with everyone (not like me at all). I could then hear the midwife telling the girl in the cubicle next to me ” don’t worry you’ll be examined next” at this point I said to Mum tell them to come and examine me as I need to have an epidural as I don’t want to be knocked out if I have to have a C’section. Mum did as I asked and the midwife said I would be very soon. Still couldn’t feel the contractions.

When examined it was about 7:30pm and I was 3cm. Carried on without pain killers, then I could start to feel pain so asked for gas and air, and was then examined again this was about 9pm, this time I was 7/8 cm and can remember the midwife say that’s gone quick, when Mum told them she had my brother in 3 hrs was told this should have been mentioned sooner! Taken to the labour room for my epidural. At this point Dad was here aswell. The midwife looking after me said, ” Is your Dad called Philip Amey” to which I replied “Yes” dad seems to know everyone. She then said ” thought so my husband used to live with him when they were 21 in Brighton” and then they proceeded to chat about old times, “erm Hello I’m having twins here”

Carried on having G&A while having my epidural and didn’t feel a thing. The epidural wasn’t what I was expecting, I was expecting not be able to feel anything and not to be able to move, but could still feel slight pain and could move quite well. I was then taken to the theatre, common practice when having twins as more things can go wrong. Opal fruits – that’s what I really fancy opal fruits. Ask Dad to go and get some, 1hr later he’s back with some. The labour progressed fine at about 11:40 was told I was ready to push and so I was then thinking please let them be born on the same day. Well 2  hours later and twin 1’s head is crowning, and everyone is encouraging me to push harder ” I am pushing hard” was all I kept saying. Mum has since told me this 5/10 mins was so frustrating as they kept seeing twin 1’s head and then I would stop pushing, when I looked up all I could see was one of the paediatricians checking his nails. Did he not know this was one of the most important things that had ever happened to me ?  Finally after more than  2hrs at 02:17am on 28.11.00, weighing 5lb 5oz Twin 1 was born ” a little girl” is wrapped up and placed in my arms my little girl and I love her unconditionally. She will be called Ella.

Then I was asked if I was having more contractions. More ??  I had forgotten about twin 2!  I had my baby in my arms, and I had forgotten I had to carry on. By this rate twin 2’s heart rate was dropping and contractions hadn’t fully started again so they decided that twin 2 would be born by ventouse, I felt nothing and twin 2 came out very quickly. At 02:27am on 28.11.00, weighing 4lb 10oz twin 2 was born ” A little boy” a very little boy, smaller than his sister.

Mum and Dad were holding Ella, and my little boy with no hair was placed in my arms, His name will be Kieran. Couldn’t hold him for long, as his breathing wasn’t brilliant. Kieran was placed on his little trolley and encouraged to do well. Both Ella and Kieran were taken to special care.  Mum and Dad went with them and me and my DP went back to my maternity ward. Marmite toast that’s what I wanted to eat and the lovely staff made me some. Then was told they would run me a bath, it was nice to get clean, then I got settled in my room, this was about 4am was told I would have a do not disturb sign on the door. At 7:30am in came Sandra the tea lady asking if I wanted a cuppa, she recognised me from being in previously and was the first non family member to congratulate me, it is such a proud feeling to tell people about your own children. Ella and Kieran spent 10 days in SCBU. Kieran had to be ventilated for about 6 hrs. The only other thing was to get them feeding properly as they were 35 weeks and the sucking reflex hadn’t kicked in, I was lucky enough to be able to spend the whole time in hospital with them.