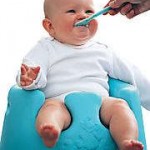 There are new innovations happening all the time in the world of baby equipment. When I had my first child, I remember lamenting the fact that you had to take the baby out of the car seat to put in the buggy – why couldn’t they just invent a seat which would do both so you didn’t have to wake up sleeping baby ? Hey presto, as soon as mine were too old to appreciate them, travel systems were born! Other recent additions to the baby apparel market is the Bumbo, a moulded rubberised seat with support for babies from 4 months on. Awarded Olympia Baby Show Product Of The Year, the Bumbo is marketed as being ideal as a second seat after a bouncy cradle. The Bumbo will support your baby comfortably in a sitting position without the need for an uncomfortable harness – especially useful at feeding time and as a secure and comfortable place to sit when you are busy around the kitchen. Soft rubbery washable surface. From 4 months. Portable, comfortable and, judging by the comments on our forums, fast becoming an essential piece of kit.

At almost 6 months, my twins are getting too big for the bouncy chairs, but they can’t yet sit unaided. I’ve heard that Bumbo’s are a good buy, and that they will support the babies’ head – I need something portable to take upstairs – Can you advise please ?” Sarah x

“Sadly Bumbos’ came after our time, but a friend with twins had them and they were fab – she used to bring them round when they came and they used to eat in them as well as sit and watch the chaos!” Helen, mum to Louise and Thomas 15.9.00 “I had one but really didn’t get on with it. Joseph and Adam could both escape from it, Adam would twist his whole body round and Joseph would push himself up on the bit between his legs. I bought it new from Kiddicare then sold it on E-bay for more than I paid for it so it didn’t hurt to try!” Love Katy xx Mum to Joseph and Adam born 14/10/04

“I had them for my 2. Fab things they are. I sold them on Ebay after for just under what I paid for them. They have really good resale value.” Rachel, mom to Michael, Hannah, Thomas & Andrew

“I bought one and it was fab for feeding at the same time especially weaning. I kept mine and re-used it for Phoebe. When you no longer want it they do keept their money too so you should be able to sell it at a good price.” Belinda Mum to Megan and Shannon (9/10/03) Phoebe (10/06/06)

“Not long ago I bought two for my boys, Calum loves his but Connor is not yet strong enough. I think they are brill!” Mum of sophie, Calum and Connor, (step mum to 2 teenager girls – for all my sins !!!! )

“I had them for my twins & I thought they were brilliant. I used to put them on the dining table & feed the twins that way. It was great to just be able to plonk them on the floor too. I used them up till about 10 months. The babies don’t have to be able to sit, the back of seat supports them. Don’t worry, your baby won’t fall out!

The bumbos are designed for babys from 4 months, so I think they have to be able to hold their heads up. I would get them. I didn’t try any beforehand, just assumed mine would get on with them & luckily they did. Don’t buy them brand new though if you can help it. Try the For Sale board on this site, there may be a couple going.” Kirsty, mum to Sebastian – 6 Felix & Anastasia – 3 and to The Lovely Sofia – 18mths

“I thought that they were great too and definitely made the most of them until my little boy was able to climb out. And as others have said, they have good resale value so was able to sell on. I used them when feeding, reading to them and just having them stay in one place while I was doing something in the kitchen.” Jocelyn

” I loved them too, great for feeding and when one was waiting to go in the bath. ” Elizabeth, mum to Angus , Fraser , Florence and Ishbel.

” Hi Mine hated them. I took them back in the end. I guess its like everything – some will love them, some won’t. Keep your receipt would be my advice and you can always return them.” Sunila xx Proud Mummy to Emily Elsie (4lb8) and Isobel Ivy (5lb) “I had one, thought it would be useful to have so one could sit in it while I fed / changed the other etc. I think it was a novelty to start with, but when they realised they couldn’t get out of it (to begin with) I think they felt very confined in it. They both went made after about 30 seconds in it. Tried it again later when they were older and found that they would either

b) just wriggle enough till they got themselves out it it.

Have to say it was one of my ‘most useless’ baby purchases. Sorry I can’t be more positive – save that I sold it at an NCT sale afterwards for only slightly less than I bought it for”. Hopeful x

” I had one and it was great. Samuel was two big for bouncy chair and could not sit in high chair. So it was great for that in between stage to feed him.” Em Mummy to Dana and Samuel

“Here are mine at 9 months…. They love it, they only problen is Luke is dead skinny and can get out of it. My two are now a year old and have given up on them, they can just get out of it. Vicci ”

“We had them aswell and loved them. I found the cheapest place was Kiddicare as they do a discount on buying two and free postage. As you say it’s not always cheaper to get on Ebay.” Daniellexx

“I thought they were brilliant for that phase from weaning until being big enough for high chairs. They’re also so handy for parking them when you’re showering/doing something you’d prefer them not to be mobile during(!) and we also really liked them in the garden where they could sit up and look around without being in any danger.” Nicky x

“I had one for Edward and used it all the time once he could sit up and hold his head up, he didn’t slouch in it. The way it’s designed keep their backs upright, wish I’d had them for the boys! And I also used baby walkers and none of them slouched in them either!!!!” Amy, mum to Mollie, Joshua and Thomas, and Edward, Charlie and Dannie my little Angels born too soon.