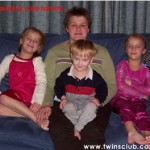 Let’s start at the beginning. I got pregnant at my dad’s wedding. The wedding was in France and was a long-winded affair. In between the end of the main course and the dessert, I convinced my then partner (now my husband) to go back to the hotel to rest. Rest we did not. Getting pregnant I did.

As I was feeling off colour a month or so later, I did a pregnancy test. It took seconds to be positive. I was overwhelmed, so was my partner. He asked me to marry him then and there which we did 2 days later (no time like the present and all that!).

I went to see my doctor who said that as I had moved to another area of the city, I had to move practice as well. She recommended one near me. I went to see that new doctor (a young man) to be told that before I was 12 weeks pregnant I could lose the baby at any time. I went back home in tears. Before I left the surgery I had made an appointment with the midwife. By the time I had gone home, I was in tears convinced that I was going to lose the baby. My husband was not happy and we decided that after the midwife appointment we would move to yet another surgery (nearer to home for practical reason).

At the midwife appointment, as I was feeling sick/queasy most of the time I asked if I could be having twins. My husband had by that time revealed that his oldest sister had twins and that twins run in his family. She just said I was maybe wrong with my date but I knew exactly when I became pregnant so did not believe her. The new doctor organised the scan very quickly so off we went to see what kind of “alien” was growing inside me!

The scan itself took forever. The lady kept going back to the same areas. By the time she had finished I thought my bladder was going to explode. I could not see the screen but could see that my husband face was very white. He is a bit squeamish at the best of times. Then the lady said “you are having twins”. I burst into tears. I was in shock. The radiologist was so concerned she went to find a midwife to speak to me. I eventually got over the shock and was allowed home after having given blood, urine sample, promised to come back for the more detailed scan… My husband could not come with me to the second scan so off I went on my own with my full bladder. The radiologist took one look at me and said can you go to the toilet and empty half your bladder. No problems I said, thinking how on earth will I know it is still half full!

Then she scanned and scanned for ever. Then handed me my notes and sent me back to see the doctor on a different floor. She did not speak to me during the scan. I found it a bit scary being prodded by strangers at first, by the end of my pregnancy I was used to it. On my way down, I read the notes. I did not understand most of it, except for the bit that said one girl (80% positive), one girl (56% positive). Loads of foreign words that I was hoping to the doctor or the midwife could explain. They did not. I was measuring big and they wanted me to come back 4 weeks later for another scan, and I was to see my normal midwife in between. I did not know any better and I thought that was the normal care. (Good standard I thought). So it went like that: once a month a scan, then half way through the month a midwife visit until I was 32 weeks pregnant. One consistent date was the babies due date: 22 March. Spring is a nice time to be born, I thought, and I will have recovered for my birthday the following week.

So in January we decided to join the antenatal classes (3). We sailed through the first two. By the week of the 3rd class, I had just started my maternity leave. I had gone shopping most of the day for silly thing like cushions. I was on and off the bus, doing quite a lot of walking. By the end of the day I was so tired. After tea we walked down to the clinic for the last class (15 minutes walk on a good day), it took us a bit longer. A couple of new parents told us about their wonderful child and the way labour started. By that point my back was hurting and I went to speak to the midwife (she happened to be the midwife I saw when I was 8 weeks pregnant) she said “you are only 32 weeks, you will be fine. It is just backache.” I wanted to take the bus home as I did not think I could walk back home (especially as it was uphill). But my husband reassured by the midwife said “you will be better soon let’s walk”.

Half way up the hill the pain was so intense I could not walk. It passed and I carried on. Once home we had a snack, then went to bed. My husband fell asleep instantly. I was trying to relax. Then I heard a clonk noise, followed by another clonk noise then water went everywhere. (new mattress as well). I woke my husband to tell him I think the babies are coming, then I disappeared in the toilet. My husband called the hospital, got an ambulance (we did not have a car then), help me get dressed (note to self : do not put legging without pads once water have broken). The ambulance crew took me in. I could see panic in their eyes once they knew it was twins and I was 32 weeks pregnant. Once in hospital I was examined, then left for what seemed so long that I took refuge in the toilet. My leggings were soaking; nobody offered me any pads or dry trousers so sitting on the loo seemed appropriate.

A nice doctor said that they had a slight problem: I was in labour, twin 1 was breeched with her foot engaged (she put her foot in it), they did not have any space in special care. She had just phoned around and gave us the choice of location: Leicester (too far), Newcastle (too far) or Huddersfield. I knew how far Leicester and Newcastle were but I did not know where Huddersfield was. My husband asked if it was in Yorkshire (something to do with Cricket). When the doctor confirmed we said OK for Huddersfield. I was once again put in an ambulance still in my soggy leggings. We had a midwife with us. I had never been in an ambulance with blue flashing light. It would have been very exciting in other circumstances!

It took 20 minutes to go from Leeds to Huddersfield. It took longer than thought as the ambulance crew did not know where the hospital was (?..!!). Half way there I wanted to push and the midwife said I can stop the ambulance and deliver the babies there and then (she did not know that twin 1 was breech with foot first). I lied through my teeth and said I was ok. Then everything went very quickly: I was put in a bed, examined, told that I had 3 options: normal delivery (high risk of losing twin 1), C-section under total anaesthesia ( My husband refused as he knew I had to be resuscitated at the last one) or spinal block and c-section. At that point it was 3am. We had been on the go since 11pm. I wanted the babies out. I was trying not to push. Within a few minutes I had a spinal block done and starting itching on my face so badly, I had been taken to an orthopaedic theatre (the only one free), my husband looked like he came from ER.

Then suddenly within 30 seconds of each other I had two baby daughters. They were rushed to intensive care. I was stitched up and send to bed at last. In the morning I was given 2 photos (to increase my milk flow) and then allowed to be wheeled to see them. One looked just like my husband, the other like my paternal grand father. They also looked like skinned rabbits but they were mine. The girls stayed in hospital for 20 days then came back home. I was allowed home after ten days. Life has never been the same since but 9 years on, I still looked on that day as one of the best. Having two babies at once is hard work but I would not have had it any other way. I went on to have a boy 3 years after and had a natural delivery. The midwife told me after reading my notes I was so lucky to be able to give birth so quickly (under 5 hours from start to finish each time). Next time who knows!