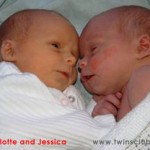 My birth story… by Beccy

I was admitted at 10pm on Monday 6th March 2006, with severe swelling to my feet and ankles, which was later diagnosed as pre-eclampsia as my blood pressure was 160 over 106 and I had protein in my urine!

After a near sleepless night in a crowded antenatal ward the decision was made to induce me at 2pm the following day – I began contracting at tea time. The pains got stronger but I could manage with no pain relief. At 9pm I was moved to a side room so Jonathan could stay with me – but the pains stopped and only tightenings continued, so we sent him home at about 2am.

By this stage I had been catheterised as there was concern how much water I was passing – well how little to be precise! The following morning Jonathan returned and I was taken to the delivery suite as a bed was now available, and I was induced with gel again. But come 2pm I was only 2cm, I was offered my first food in 24hrs!!! This saved my birth plan, as moments later my consultant came in and decided we were having a C section as I was now barely passing any water despite being on a drip for 24hrs. But because I had just eaten she would allow me to go another 3 hours before intervention unless I made rapid progress.

So at 3:30pm my waters were broken and suddenly there were contractions and pain a plenty!!! I progressed rapidly on gas and air until at approx 6ish I was given an epidural to numb the pain – luckily I still had limited feeling in my hips and could feel contractions!! We had a happy in fact joyful time whilst the epidural took effect – laughing & joking! We were soon guessing that they’d be here for 8:30pm as my midwife was going at 9!!! She didn’t want to miss this – but 9pm came and went and a wonderful team took over a midwife and student!

We decided the student Suzanne would deliver the twins if possible! Sure enough after pushing for what seemed like 20 or 25 mins Charlotte (4lb 12oz) arrived at 21:48 with Jessica following 19 minutes later at 22:07 (5lb 3oz). Charlotte was slow to cry and was given oxygen she scored 8 on the apgar. She immediately looked like Joshua our son, with lovely tiny features! Jonathan cradled her and held her skin to skin! Jessica was born and immediately cried; she scored an apgar of 9. She was a lot pinker than Charlotte and her head was rounder as she hadn’t been pushed out like Charlotte had (not as brutally)! The placenta was delivered a good 15 minutes later – after a little panic it wouldn’t come, and Suzanne the student would get her birth discounted if she didn’t deliver it!!!! But the syntocin helped that!!! I was then stitched up – I had been given an episiotomy just in case I should tear.

The way they stitched me was magical – it was all internal and I could hear Gill the Midwife teaching Suzanne about blanket stitches and other sewing terms, all the stitches were internal to prevent infection and soreness (I have barely felt a thing).

The funny bit was at the end when she said ‘would you mind me putting my finger up your bum to check I haven’t sewn it up?’ “Of course” I replied, I mean how can you refuse! So my beautiful girls lasted until I was 36w + 5 days!!!