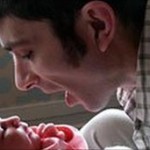 Hope you don’t mind a birth story from a Dad.

After several years of struggling to conceive, my wife, Lisa, and I succeeded first time with IVF and were enjoying a wonderful problem-free twin pregnancy. In week 28, a scan showed that one of our twins (‘Twin 2’) was not growing as fast as he should. Our Consultant started using scary terms like ‘Intrauterine Growth Retardation’, ‘placental insufficiency’ and ‘compromised pregnancy’. The next three weeks were an endless and stressful stream of scans, blood tests, blood pressure readings, CTG’s etc, etc. We were set the challenge to get to 32 weeks, when the two babies could be delivered if things deteriorated for Twin 2 with relatively low risk to Twin 1.

At 30 weeks things got more complicated when my wife developed pre-eclampsia and was admitted to hospital for close monitoring. She was admitted to the labour ward, which, as you can imagine, is not exactly the most restful place. Still she managed to get a quiet side-room, where she spent her time reminding midwives to take her blood-pressure and check for our precious foetal heartbeats. The next week wasn’t great for either of us. We were worrying about both Twin 2 and about my wife’s health, while not being able to rely on each other’s moral support.

At week 31+1 day, Lisa’s pre-eclampsia started to escalate, and our Consultant decided we couldn’t wait. So Lisa was prepped for her c-section. I joined her in the operating room at 3pm. She had epidural anaesthesia, so she was fully conscious, with a screen separating her from the action down below. My job was to stroke Lisa’s hair, talk to her and keep her calm. No small task, with the rummaging around that was going on the other side of the screen. I hadn’t wanted to look, but in the end I had a peek over the screen. It was amazing seeing the two babies delivered – Holly (3lbs 11oz) and Noah (2lb 10oz). It was such a blessed relief to hear them both cry as they emerged, both with good apgar scores.

They were both then transferred to the Special Care Baby Unit (SCBU), and Lisa was sent to Recovery. I was left to spread the good news to friends and family.

Once the babies were hooked up to their incubators I was allowed to go and see. It was lovely to see them alive and doing reasonably well. It was good to know they were in such good hands. But it was hard not to be anxious about them, with so many tubes and wires connected to the noses, mouths, chests, arms and feet. We were reassured that our twins were considered quite ‘mature’ as premature babies of 31 weeks and, while both needed assistance breathing, they were both, at least, breathing for themselves.

Lisa, of course, was very sore and was returned to the labour ward for more monitoring for the next couple of nights, to a room with three women who had just given birth and had their babies by their side. Apart from anything else, this didn’t make for a good night’s sleep!

Here we are, a week after the birth. Holly is breathing by herself and being fed on Lisa’s expressed milk. Noah still needs a little bit of help. But both are doing very well, with extremely good chances that they will develop normally. The greatest joy is that we can now hold them and change their nappies (never thought it would be a joy!) and do things that normal parents can do. The upside of the SCBU is that Lisa has a few weeks to recover from our C-section before our twins come home, with the added bonus that the wonderful nursing staff are getting them into a nice feeding routine which will ease the chaos when they return home.

For all the worry of the last few weeks, it is such a joy to have our children with us at last. And despite a few minor niggles, we are profoundly grateful to our wonderful NHS, which has looked after us extremely well. We know we have a challenging few months (and no doubt parents of twins will tell us: years) ahead, but to have a boy and a girl, a ready-made family, after fearing that we would not be able to have one at all is such a blessing. And entirely worth it.