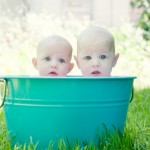 Mums and Dads give their verdict on the best and worst bits of parenting multiples..   What would you add?   Send us your Bests and Worsts…

THE BEST THING IS :

“Best thing – is having an instant family. I can’t imagine having a singleton – they must be such lonely children! ”

“Without a doubt the attention you get everywhere you go!! I feel like a celebrity in my street and I’ve got to know so many people just because they stop and take time to chat”

“The feeling of joining a ready made support group like Twinsclub.  With my first I didn’t get to know any other mums as there didn’t seem much point in going to a Mother and Toddler group with a 6 week old but with twins I felt much more welcome”

“The way they laugh and giggle at one another just kills me. It’s the best anti-depressant (apart from Prozac of course !)”

THE WORST THING IS :

“When they are ill at the same time. It takes two people to look after them. And if one goes into hospital it’s hard to leave the other at home.”

“The attention you get everywhere you go. People just can’t stop themselves and it’s really difficult when the children have been naughty and I’m supposed to be mad with them.”

“I’m trying to educate my children about strangers but it’s so difficult when so many come up to them and me and start talking. I feel they must be really confused about the whole issue and I don’t blame them.”

“The guilt I carry most of the time that I don’t spend enough time playing with them or enjoying them because there’s so much else to do. If I pick one of them up I feel bad about the other and on it goes.”

“Not being able to just “nip” anywhere anymore.”

“The fear of getting arrested for leaving them in the car while I run into MacDonalds to get Happy Meals because it would take over an hour to get 4 children and I double buggy in and out again.”

“Being made to feel like I’ve got a disease by some “well-meaning friends”. They all look after each others children from time to time, but because I’ve got twins they don’t even ask. When I offer they say “are you mad ? You’ve got enough on your plate”. Which means I don’t feel I can ask them to look after mine and I feel left out.”