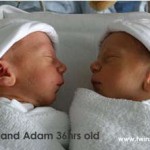 Up until 28 weeks I was sailing through my twin pregnancy – no morning sickness, scans all fine and I was feeling great.
A few days before my next consultant appointment I noticed that my hands and feet were incredibly itchy. I was constantly rubbing my bare feet on the carpet, I couldn’t sleep and I would get up several times during the night to run my hands under cold water. Nothing seemed to soothe the intense itching.

I’d read every pregnancy book and magazine I could lay my hands on, but although I knew that itching could be a sign of some problem I wasn’t worried. It was only itching after all.

I had my consultant appointment a few days later and told her about the itching. She said I was right to report it and arranged some blood tests straight away but told me it was probably nothing. I went back to work feeling reassured.

Later that afternoon I had a phone call at work telling me to come back to hospital at once as my blood test had shown a problem. I called my husband and we went together. I was immediately strapped up to a monitor and reassured that my babies were fine but I needed to wait to see a doctor. One by one all the other ladies in the ward were sent home but I had to wait and was told that I should expect to be kept in, I was so upset and frightened, I’d never been in hospital before.

At last the consultant who I’d seen earlier in the day arrived and told me that I had abnormally high levels of bile acids in my blood which indicated a liver problem called Obstetric Cholestasis. I would need to stay in hospital for some more monitoring and tests. My husband was sent off home to get me some overnight things – he forgot my pyjamas and I had to sleep in a hospital gown!

The next week was a nightmare – I was kept in hospital for 2 nights, discharged for 1 night then called back in for another night following a poor blood test result. I soon got used to the hospital routine – blood pressure, temperature and urine sample several times a day, fetal heart monitoring twice a day, hospital food and the all too short visiting hours. Mostly I was just bored. During this week I was sent for a liver scan, presumable to rule out any other type of liver problem.

Finally, on the Friday evening I was seen by another consultant with a swarm of students who said that I could go home as long as I returned for twice weekly monitoring and weekly blood tests. He said that my babies would be induced early but now was too early and they would aim to get me to 34 weeks.

I was given 3 lots of medication to take. Ursodeozycholic Acid to help with my bile acids, Vitamin K to prevent haemorrhage at birth and Chlorphenamine (Piriton) to help with the itching. The Piriton did nothing but after a few days on the UDCA the itching stopped completely and my bile acid levels began to fall. I’m told this is unusual though, I guess I was lucky.

I came home and of course I read everything I could on the Net – big mistake! Lots of horror stories about still birth and sudden death in the womb. I felt like a ticking time bomb. I also had lots of reassuring stories, people who knew someone who had “that liver thing” and everything was fine. I went for all my monitoring and soon got over my fear of needles thanks to all the blood tests, there were no more problems.

I was booked in for induction during my 36th week of pregnancy, apparently the risk of stillbirth increases dramatically after 37 weeks. A few days before my induction I was given a membrane sweep which was painful and failed! I won’t describe the induction as that’s a whole other story but my twin boys were born by emergency caesarean at 36 weeks 4 days weighing 5lb10oz and 5lb7oz. They were completely fine and needed no special care and we all went home 2 days later.

I’m so glad I didn’t ignore the itching and I’m grateful to the consultant who didn’t dismiss it and got me the right treatment..