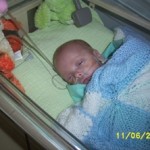 I found out I was having twins at 9 weeks. I had an early scan because I was bleeding,  so fearing the worst we set off for the scan. When we were told it was twins I remember swearing lots,  and telling my husband he would have to give up work, as we had a 1 year old as well!

I had an OK pregnancy suffered with sciatica, but other than that was fine I saw a doctor every 2 weeks to check everything was fine. At 27 weeks the doctor decided to give me steroid injections in case they were early.

On the morning of the 28th of April I  got up and felt a bit weird, and had really bad pressure on my pelvis. My mum said it’s probably because you’re having twins so although it was uncomfortable, I didn’t think any more about it.

I had to go shopping that morning to buy my brother in law a birthday present, so my mum myself and sister went in to town. While we were out the pressure was getting worse so we decided to go home.

When we got home I phoned the hospital and they told me to come in and be monitored so my sister and I went to the hospital, and my mum looked after Bethany. In my dad’s car I started getting pain. When we arrived at the hospital the pains were getting worse, and the nurse said it sounded like a water infection… but when the doctor came in and examined me I was 10cms dilated!!!

My sister phoned my husband at work, who thankfully arrived in record time.

The doctor said she needs a caesarean. The babies were breech so they rushed me through to the theatre. At this time I had an overwhelming feeling to push, but they kept saying don’t push.

I had an epidural, and 5 mins later Jack entered the world weighing 2lb 8oz. Another 5 minutes later Ellie was born weighing 2lb 7oz.

They were taken straight away to special care and I went in to complete shock. I couldn’t stop being sick. Just an hour earlier I had been walking round the shops with my family, and now I had had twins!

Ellie had to be transferred to another hospital as they only had one ventilator, and a day later Jack joined her. They spent a total of 10 weeks in hospital but are beautiful 5 yr olds now and doing just fine!